Logan Kanapathi was elected as the new MPP of the Markham - Thornhill riding in 2018, winning over 50 per cent of the popular vote.

He grew up in Sri Lanka during the violent civil war. During his university time, he was a student leader and outspoken critic of the government’s atrocities and oppression against the minority community, becoming a respected voice for the rights of the Tamil people and the many atrocities that were being committed against them. His voice and activism soon endangered him and his family, and he fled Sri Lanka as a refugee in 1983 for fear of persecution.

A passionate believer in human rights and equality, his activism continued in Canada, and many people encouraged him to enter politics and bring a voice for the voiceless.

As a Markham Councillor for twelve years he was known for his deep-seated caring and commitment to good social policy for seniors, youth, and families, creating green spaces, and the value of diversity in the community. As budget Chair for the City of Markham he was a proponent for bringing the lowest property tax to Markham during 2009 and 2011.

As MPP, he is committed to serving Markham-Thornhill and its wonderfully diverse community. During the COVID-19 pandemic, he collected PPE and food donations for residents in need. A life-long public servant, he continues to serve the community.

Markham – Thornhill is one of the largest ridings in the City of Markham and York Region with a population over 100,000 within an area of 42 km². The electoral district is bordered by Bayview Avenue to the west, Steeles Avenue to the South, Highway 407 to the north and the Rouge River to the east.

Markham is the most ethnically diverse municipality in Canada, and the Markham – Thornhill area reflects this diversity in ethnicity and in its the local neighbourhoods. Markham-Thornhill is a combination of rich heritage in Thornhill upscale urban neighbourhoods to the east, a vibrant commercial areas on Yonge Street and Bayview Avenue, world class hiking trails, the scenic Rouge River Valley and fine Asian and South Asian Cuisines throughout. A quality community to live, work and play. 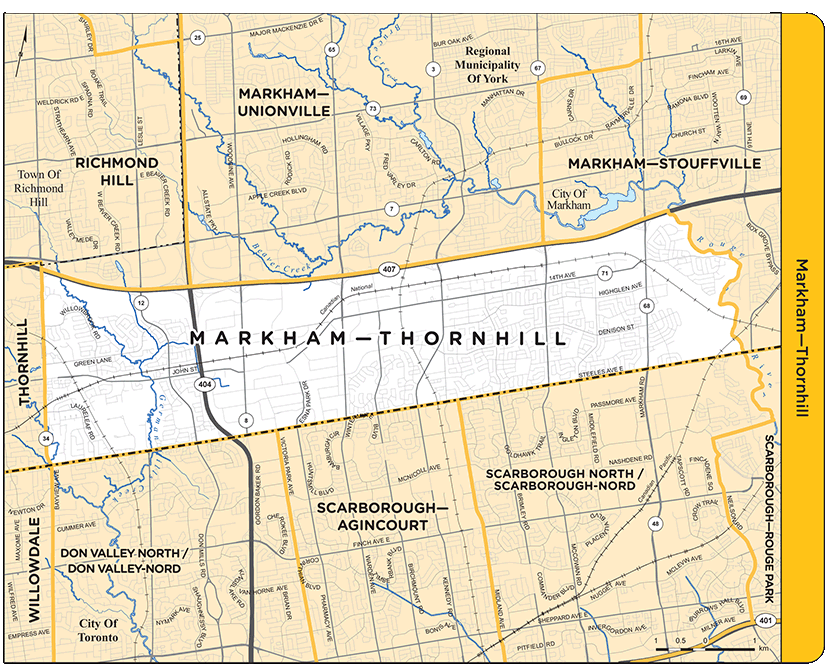